Home
/
Fertility
/
Why does sperm count matter if all it takes is 1 sperm to fertilise an egg? 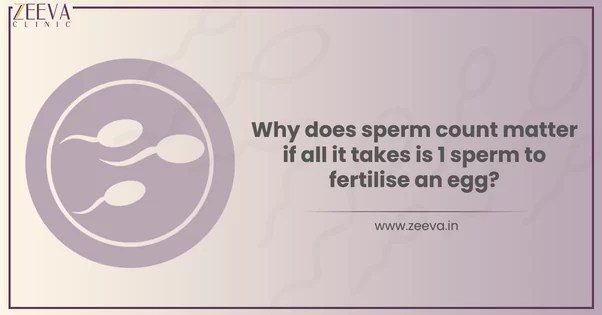 There is a misconception that for a single sperm to fertilize an egg, it is a guaranteed and easy process. However, if we talk about the actual sperm journey to the egg, it will bring into perspective how even with millions of sperm (40-150 million approx.) produced in a single ejaculation, there are limiting factors that can prevent chances for fertilization.

Sperm embark on a long and challenging journey to the egg, with very few reaching the egg for fertilization. A woman’s reproductive system can be a hostile environment for sperm, and they can only survive there for a few days.

The journey begins during intercourse when the sperm has been ejaculated and starts to swim from the vaginal tract to the egg.

More than 95% of the sperm ejaculated are abnormal, either in morphology (shape and size) or low motility (movement). That is why only a few sperms survive the long journey from the vagina, through the cervix to the uterus and fallopian tubes where the egg is released during ovulation.

When sperm cells are ejaculated, they are surrounded by a fluid called semen or seminal plasma, which is a mix of fluids from the prostate, bulbourethral glands, testes, and seminal vesicles. The fluid protects the sperm cells during the journey towards the egg by thickening and prolonging the time the sperm spend inside the female reproductive system. The fluid also allows the sperm to swim as close to the cervix as possible, where the most active sperm will be able to make it through.

Before talking about the next stage of the sperm’s journey, let’s talk a little about why only a few sperm manage to make it through:

There are quite a few chemicals and physical barriers on the sperm’s journey to the egg.

Here is the next stage of the journey once the sperm has passed the cervix mucus towards the fallopian tubes, where at least one million are required for a higher chance for fertilization to occur.

Once the sperm has entered the fallopian tubes, signals are sent from the cumulus cells of the egg.

The sperm need to push through the cumulus layer around the egg using a specialized motility movement known as hyperactivation.

There is then another barrier known as the zona pellucida, which is another additional layer around the egg. The process at this stage is known as acrosome reaction, where enzymes are released from the sperm, helping breakdown the barrier to allow the sperm to pass through.

Once the sperm’s head is inside the egg, the tail detaches, and no further sperm can pass through the zona pellucida.

Now that the sperm has entered the egg, both will prepare for genetic fusion. The sperm and egg carry 23 chromosomes each. Once fertilized has occurred, a zygote cell is formed.

The zygote will then move through the fallopian tube to the uterus and attach itself to the uterus lining of the inner wall for implantation.

If you are going through IVF treatment, fertilization takes place in the lab. At this stage, around 50,000 sperm are collected from a sample and incubated with each egg overnight, in a petri dish. This is to help increase the chances of fertilization during traditional IVF. However, a lesser sperm count can result in an unsuccessful fertilization attempt.

Have any questions? Let us help you!

No products in the cart.