Home
/
Oncology
/
Is it true that only 5 percent of smokers get lung cancer? 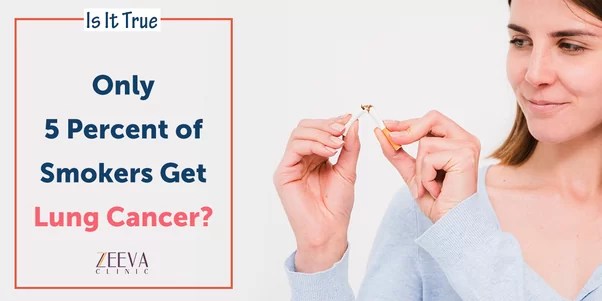 Lung cancer is the most common form of the disease, and 90% of these cases are related to smoking. It causes 1.2 million deaths a year globally.

If we dive straight into the mountain of research and studies related to the link between smoking and lung cancer, we would still not have a definitive answer. In some cases, this number is less, and in others, higher. The number of lung cancer cases, factors in a lot of variables, like age, country, gender, histology, number of years smoking, and more.

However, what we can say is, yes, smoking is one of the highest risk factors related to lung cancer. In fact, there are also an alarming number (approx 10%) of lung cancer diagnoses in non-smokers, caused by second-hand smoke. This should give you a pretty clear idea of the harmful effects of smoking.

Let’s talk about how smoking and cancer are related.

There are around 600 ingredients in tobacco cigarettes that release 7,000 chemicals. Sixty-nine of these are carcinogens (substances that cause cancer).

Looking at this list, some of these chemicals may surprise you. This can question how much do we know about what is in tobacco. However, there are a few substances commonly associated with cigarettes, which are:

Other chemicals are often found in consumer products like rat poison, an industrial solvent, etc.

So how do these chemicals play a role in causing cancer?

The tobacco smoke and chemicals found in cigarettes can weaken the body’s immune system, making it harder to fight against cancer cells and eliminating toxins from the bloodstream. This means the cancer cells continue to grow, and because of the damage to the cell’s DNA, it can produce cancerous tumors.

What other types of cancer and diseases can smoking lead to?

Lung cancer is the most common cause of cancer death. In the UK, smoking causes at least 7 in 10 lung cancer diagnoses.

However, it can cause at least 15 other types of cancer, too, including:

Other health complications, involving major organs like the heart and brain, include:

These statistics and chemicals are a real eye-opener and can put into perspective the harm smokers are doing to their bodies. What is more surprising: in most cases, cancer can be preventable.

What happens when you decide to quit smoking?

The benefits start working as soon as one hour after your last cigarette. You begin to break your addiction cycle and rewiring your brain to curb nicotine cravings.

If you are a smoker worried about cancer, it is important to remember, once you decide to quit, every year, not smoking decreases the risk of getting lung cancer and improving your health overall.

Have any questions regarding Infertility? Let's Help You!

No images found!
Try some other hashtag or username